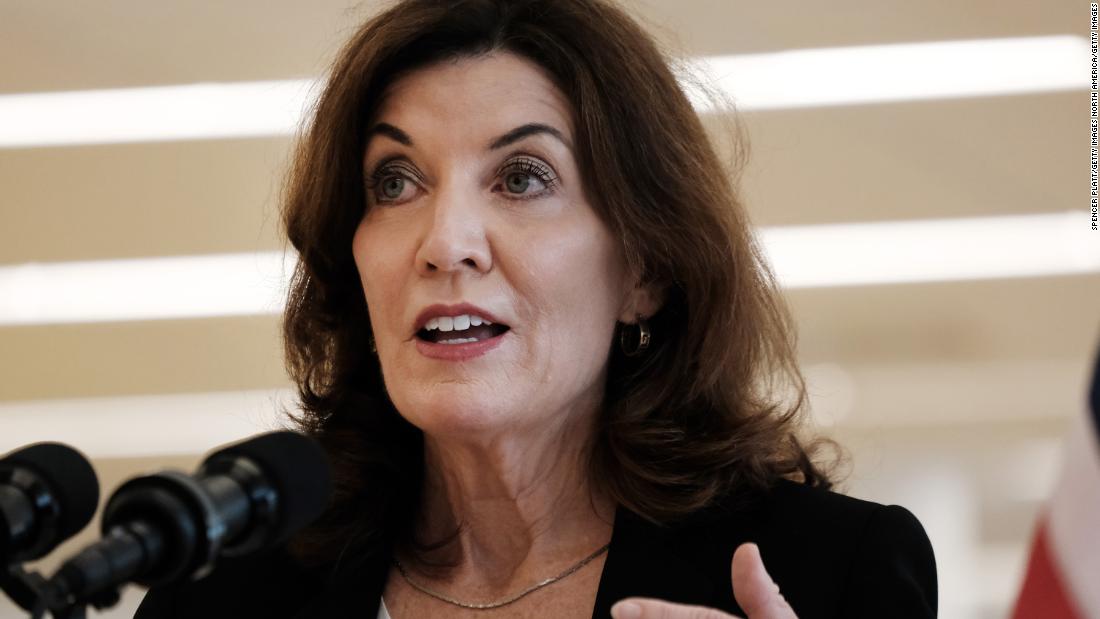 Some of the most compelling stories in politics this year have been at state capitols, shining a spotlight on the importance of state-level coverage.

In New York, Kathy Hochul is succeeding Gov. Andrew Cuomo, while Cuomo blames the media for his downfall. In California, Gov. Gavin Newsom is fighting off radio host Larry Elder and other Republicans who want to replace him. In states in between, Republican governors are opposing anti-Covid measures and claiming to defend freedom — the freedom to die from a preventable illness.

Let’s start in New York with the cover of Tuesday’s New York Post, which is headlined “DOG GONE:”

He was defiant until the end. “In his final address on his last day in office,” Gov. Cuomo “claimed on Monday that ‘intense political pressure and media frenzy’ had caused a rush to judgment on sexual harassment allegations made against him, ultimately leading to his resignation,” New York Times reporters Luis Ferré-Sadurní and Katie Glueck wrote.
He specifically “blamed the media for its reporting on the allegations against him, suggesting reporters had been too quick to accept the results of the probe” by the state attorney general, CNN’s Greg Krieg wrote. Cuomo alleged that the A.G. report “was designed to be a political firecracker on an explosive topic, and it worked,” starting a stampede: “There was a political and media stampede, but the truth will out in time.” Which begs the question: How?

Some observers of NY politics wondered if Cuomo would find some sneaky way to retain power, but he really truly left. Hochul was sworn in at 12:01 a.m. Tuesday. She will have a ceremonial swearing-in at 10 a.m. for the cameras, followed by a 3 p.m. “virtual address to the people of New York state,” which will surely be shown live by local media. The aforementioned Greg Krieg has a brand-new story previewing Hochul’s time in office here.
Most people know, from the news coverage, that Hochul will be the first woman to serve as New York governor, but the coverage should also include this historical perspective from The 19th: Hochul will be “one of only nine women governors in America — and one of four who first reached that position through succession rather than election.” Only 44 women have served as a governor of any state before Hochul, compared with “at least 1,000 men governors” in US history, Barbara Rodriguez wrote…

The looming recall election in California is getting more national press with each passing week. Reminder: September 14 is the day. Ballots have already arrived in mailboxes. CNN has a what-you-need-to-know piece here.
Peter Hamby just published an excellent overview of the race via his Puck newsletter. He says Elder “has stayed relentlessly on message, attacking the media, calling Newsom an elitist, and running a series of simple, straight-to-camera ads that don’t mention his party affiliation.” Hamby also notes that recall polls “are few and far between, but in July, Elder was leading all candidates with 18 percent of the vote.”
Since then — actually, just in the past week — Elder’s campaign was “battered by new revelations, including a Politico report that his ex-fiancee alleges that in the course of an abusive relationship, he pulled a loaded gun on her during an argument. Elder has denied those accusations,” Politico’s Carla Marinucci wrote. “CNN last week reported Elder’s history of crude remarks on women, and The San Francisco Chronicle reported Elder once said it was ‘smart’ for women to tolerate sexism and offensive workplace behavior.” The Los Angeles Times has been scrutinizing Elder as well.

The LAT’s Sacramento bureau chief John Myers wrote last week that “Elder has succeeded in gaining the national attention the others surely crave, accepting multiple invitations in recent weeks from conservative-friendly TV and radio programs.” He said the appearances have been “laden with assertions that went largely unchallenged by his fellow, friendly broadcasters.” This is an advantage that comes with being a conservative radio host — while you have media rivals, yes, you have lots of allies for your campaign…

— Lindsey Boylan, the first woman to publicly accuse Cuomo of sexual harassment, posted a picture of his resignation letter along with her message, “Let’s make a future where our daughters won’t have to fight the same fights.” (Twitter)
— Staying on the state capitol theme, here’s another example of governors in the news: “GOP governors tout Covid-19 treatment over prevention measures…” (CNN)
— Florida Gov. Ron DeSantis was back on Sean Hannity’s show Monday night, and back to blasting The AP… (Florida Politics)
— A reason for hope? “In solidly blue Vermont, a Republican governor has transcended the partisan bitterness engulfing much of the country…” (US News)