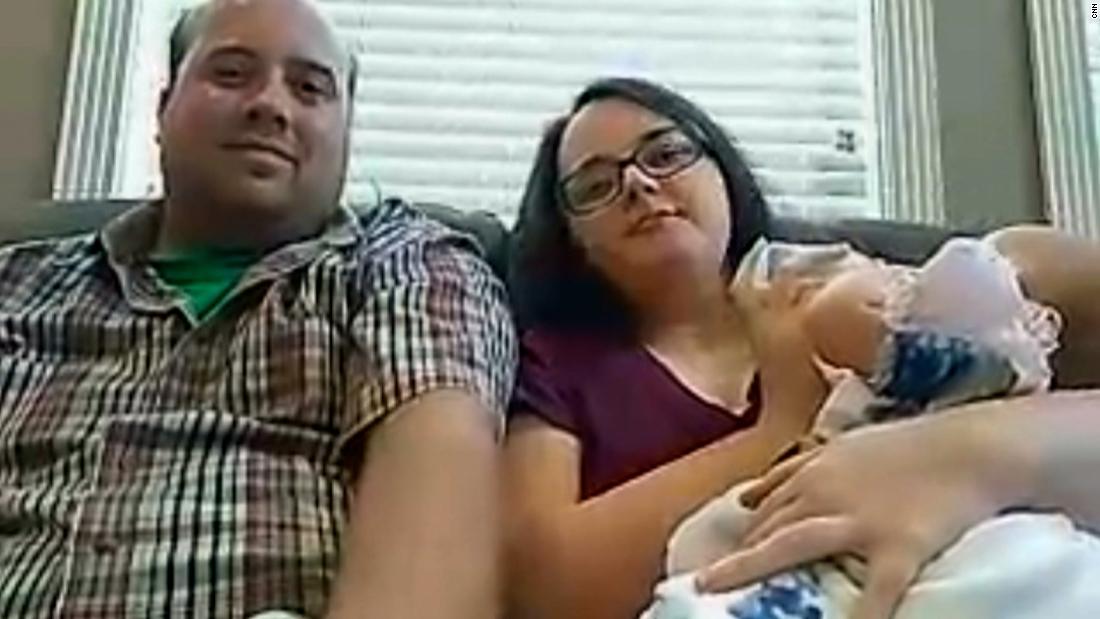 “I just felt like I was going to drown,” she told CNN’s Kate Bolduan, “It just happened so quickly.”

“Everything was floating … everything was under water,” Yates recalled. “My ankles were actually covered with water at that point, and so I just put her at the highest level I could and just prayed to God that we would be okay.”

The raging waters pulled homes off their foundations, left cars and other debris strewn about, and washed away almost everything in its path.

As Yates struggled to keep her daughter safe, family members posted on Facebook that she and the baby were in trouble. With the water getting deeper, Yates’ brother-in-law, Alan Wallace, headed out to try and rescue her and the baby. He got his kayak as close as he could to the house and got out.

Wallace posted a video as he waded through chest deep water, saying, “If I die and don’t make it, I tried. I love y’all.”

Fortunately, he made it into to the home, and rescued Vanessa and the baby with the boat.

The search for victims continues

Other survivors described similar experiences of fast rising water forcing them to escape with just their lives.

While they survived, about 10 people remain missing, a large decrease from reports of 45 people missing immediately after the flood.

In the chaos of the storm, phone service was lost and people couldn’t reach their loved ones, leading to a jump in reports of missing persons, officials explained.

Waverly Police and Fire Chief Grant Gillespie said Monday there are now less than 10 people that they are “truly concerned” could be missing.

“They’ve been checking a lot off today” Gillespie said. “We’ve seen that number come up and down, because new folks will get added to the list when somebody can’t get in touch with them, whether it’s by phone or social media, and we send officers out to do checks and find them, that they’re okay.”

Search crews used dogs and other equipment in their efforts to find additional victims Monday, with debris left behind by the raging waters complicating efforts, Gillespie said.

“They’ve been a little slower going, because we’re dealing now with debris that we have to move and search,” the chief explained. “If you’ve seen things like the debris pile against bridges and stuff it’s, it’s very tedious process.”

Amid the searches, the county is also trying to recover from power outages and water issues caused by the flood.

The flooding on Saturday was caused by several storms training over the same area. Extreme rainfall rates are becoming more common because of human-caused global warming, scientists say.

Humphreys County Sheriff Chris Davis said most of the power outages in the county were restored Monday, adding that lingering outages are focused mostly inside the city of Waverly.

“Out in the county, we’re in a lot better shape than the city, but we’re still getting out in areas and attacking those areas as well,” Davis said.

A curfew will remain in place for the next several days, according to Gillespie

Law enforcement partners from around the state have been assigned to patrol the city and county overnight, he said.

As Yates and her baby were trying o stay above water, her husband, Anthony Yates, was trying to get home.

He told CNN after his wife told him the house was flooding, he drove home as fast as he safely could, but his route home was blocked by emergency responders on a road that was washed out.

So Yates got out of his vehicle and walked down railroad tracks in an attempt to save his family.

“I wasn’t about to wait. I had to make sure that my wife and baby were okay,” he explained

Once he made it to town, he was lucky enough to get a ride to his home from some people he ran into.

When he arrived, the house next door was gone and its remnants were on fire, Yates said. He asked emergency workers if they were sure his family was safe and they said his house was empty.

Still, he pushed them to double check and convinced them to go back to the house.

That’s when, through a broken window, he saw two pointy ears belonging to the family dog, Lily. Yates called out to the dog who was also soon rescued.

CNN’s Rebekah Riess and Alta Spells contributed to this story.