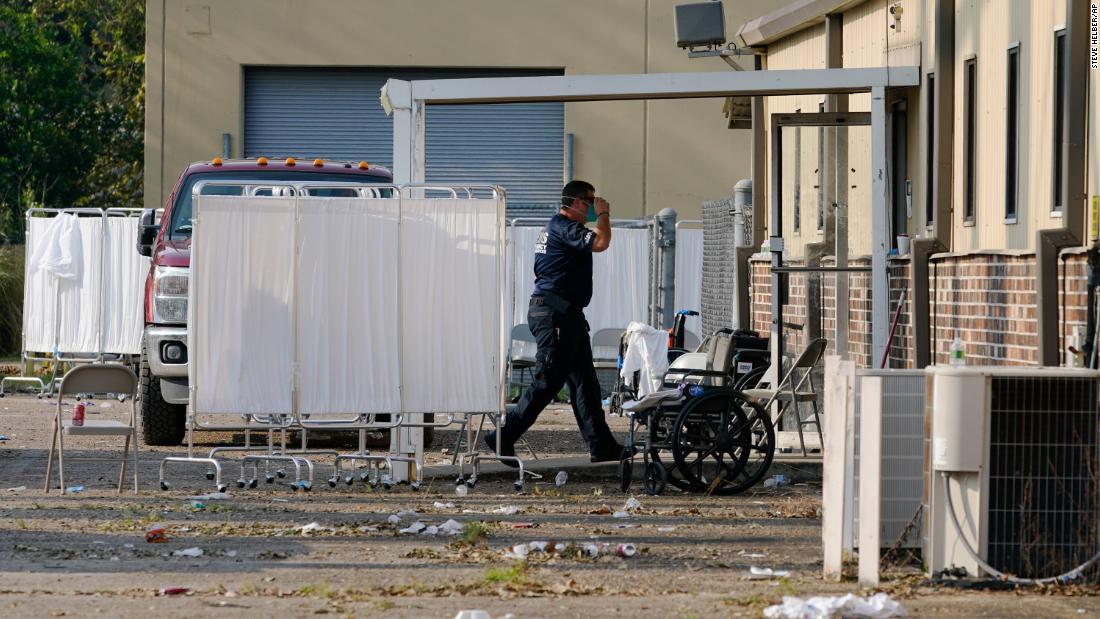 The woman was pronounced dead at an Alexandria, Louisiana, shelter Friday morning, Rapides Parish Coroner Dr. Jonathan Hunter said, adding that her death “very much will be considered storm-related.” Hunter has requested that an autopsy be performed to determine the cause and manner of death.

The temporary shelter, a warehouse in the town of Independence, was overwhelmed after receiving hundreds of residents from seven nursing homes on August 27 ahead of Hurricane Ida, officials said, as power and sanitary conditions were failing.
“Electricity went out more than once, and when that happens then the oxygen concentrators stop working. So that’s a problem in itself. I spoke with the governor and we got oxygen tanks moved in here,” Independence Police Chief Frank Edwards told CNN affiliate WVUE.

Following Ida’s landfall on August 29, the state’s health department said it heard reports about “deteriorating conditions” in the facility. Inspectors arriving four days after the residents arrived were expelled and kept from doing a full assessment, according to the Louisiana Department of Health.

The department moved each person out of the building by Thursday evening, according to Louisiana State Health Officer Joe Kanter. Gov. John Bel Edwards said a total of 843 residents were moved from the location by Thursday.

State Attorney General Jeff Landry, a Republican, on Friday announced that the state’s justice department is launching a full investigation into the matter.

In a news release, Landry drew attention to the fact that the Independence Police Chief Frank Edwards, and the sheriff of Tangipahoa Parish, Daniel Edwards, are brothers of the governor, who is a Democrat — and that both made statements that they did not intend to investigate the deaths, according to Landry.

Independence Chief Edwards told CNN his department was too small and didn’t have enough resources to investigate and has been overwhelmed with recovery efforts since the hurricane.

In an interview with WVUE, the chief had initially said he had no plans to investigate, but later in the interview left open the possibility.

Landry also expressed concern Friday that his Medicaid Fraud Control Unit and the Unified Command Group were not informed of the potential patient abuse or neglect until news of the deaths was made public.

“Our goal will be to determine who decided to move these patients to this apparently unsafe and potentially inappropriate facility,” the attorney general said in a statement.

“We wish to determine who authorized that these patients be moved to that facility, who oversaw the movement, who later turned away career staff members of the Louisiana Department of Health when they attempted to look into this situation. And why did the Police Chief and the Sheriff state an investigation was not needed,” Landry added. “How exactly did these deaths occur?”

Travis said before the Attorney General’s Office was even involved in the incident at the warehouse facility, the Tangipahoa Parish Sheriff personally asked the Coroner’s office to consider performing autopsies on all of the deceased.

“Additionally, Sheriff Edwards has publicly stated this matter is very serious and the conditions deteriorated to the point where a full blown investigation is needed to see who all is responsible for what happened to those vulnerable patients that were evacuated to Independence,” Travis said.

According to Travis, Sheriff Edwards asked him to contact the US Department of Health and Human Services to report the incident and request an investigation.

“Our office, as always, is willing to help in any way that we can,” Travis said, adding that the Attorney General’s Office and Louisiana State Police are leading the investigation of the incident.

A review of business licenses by CNN has found that Baton Rouge, Louisiana, resident Bob Dean Jr. is listed as an executive with all seven nursing facilities, in addition to the warehouse.

CNN has reached out to Dean Jr. but has not received a response.

When questioned about the warehouse by WVUE, Dean said that, “we only had five deaths within the six days and normally with 850 people, you’ll have a couple a day, so we did really good with taking care of people.”

Of the four deaths initially reported, a coroner classified three as storm-related, the state Health Department said. Those were a 59-year-old woman from Jefferson Parish, a 52-year-old man from Orleans Parish, and a 77-year-old man from Terrebonne Parish, Gov. Edwards said Thursday evening.

Fourteen of the residents who were removed had to be taken to hospitals for further treatment or evaluation, officer Kanter said.