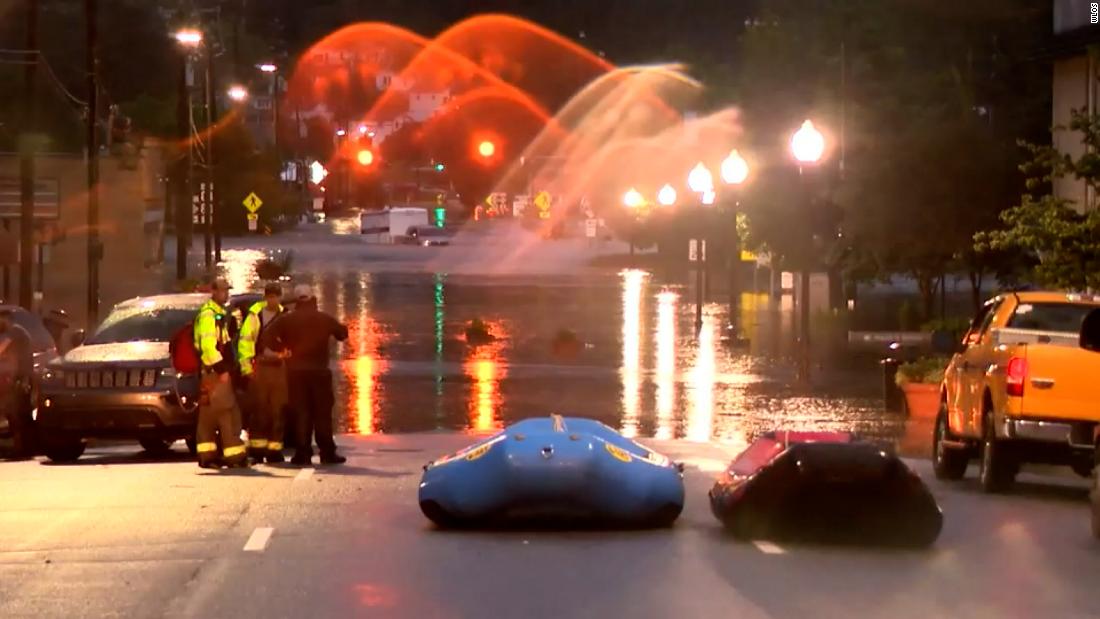 Sheriff Greg Christopher said the department started getting reports about high water and deputies on Tuesday afternoon and began to evacuate residents.

“As the water level began to rise, a whole lot faster than I have ever saw it rise here in our county, we soon started to have to rescue people from their homes and provide additional assistance to our residents, and to our fire departments,” Christopher said.

“With the help from water rescue units from throughout the state of North Carolina, we have been searching abandoned vehicles, homes, buildings, for survivors and we’ll continue to search, to ensure that every community member is located, or at least accounted for,” the sheriff said.

Donaldson said that there are 54 people currently sheltered, with bridge and road closures throughout the county, which is west of Asheville.

Fred, which weakened on Wednesday, was still active.

Flash flooding and tornadoes are possible as the storm slides through the Northeast, having unleashed tornadoes and heavy rainfall farther south.

As of an 11 a.m. update Wednesday from the Weather Prediction Center, Fred was over West Virginia, with maximum sustained winds of 25 mph.

“Fred is now a post-tropical cyclone … but the remnants of Fred could still produce dangerous weather through tonight,” CNN meteorologist Dave Hennen says.

Thunderstorms associated with Fred are expected to increase in intensity. Some could produce tornadoes and damaging wind gusts of up to 70 mph.

A tornado watch is in effect until 8 pm ET for over 15 million people in the Northeast, according to the Storm Prediction Center. The new watch includes the metropolitan areas of Baltimore, Washington, DC, and Harrisburg and Scranton in Pennsylvania.

Within the past 24 hours, 3 to 6 inches of rain has fallen across the Southeast into the Appalachians — with 3 inches falling between 8 p.m. and 10 p.m. Tuesday, according to CNN meteorologist Michael Guy.

As Fred spins toward the Northeast, flooding rains will continue to be a concern. Over 20 million people are under flood watches stretching from Virginia to Vermont.

Fred generated heavy rain and a number of tornadoes from Georgia to the Carolinas on Tuesday.

Tens of thousands of customers were without power at one point, according to poweroutage.us, amid reports of downed trees and power lines.
At least two tornadoes were reported in Georgia and three in North Carolina, and several tornado warnings were issued for South Carolina.
Fred made landfall in the Florida Panhandle at Cape San Blas on Monday afternoon with maximum sustained winds of 65 mph. It was downgraded to a tropical depression Tuesday morning as it lost strength over land.