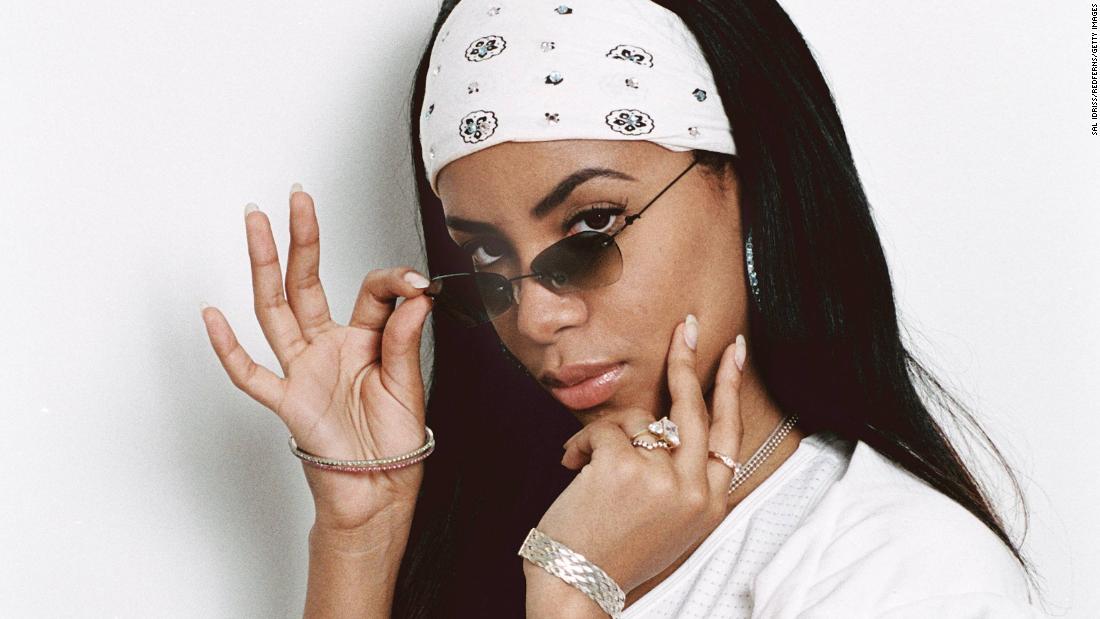 Aaliyah’s velvety smooth vocals redefined R&B in the 1990s, and her sporty, edgy style celebrated individuality in a decade that saw the rise of matchy-matchy pop groups.

During her all-too-short career, the singer and actress — full name Aaliyah Dana Haughton — epitomized the era’s street style in Tommy Hilfiger crop tops, low-slung baggy pants and utility jumpsuits. But she also mixed in darker, futuristic undertones, with glossy vinyl jackets and pants, wide chokers and black lipstick. (She even went full vampire for the 2002 gothic horror movie “Queen of the Damned,” donning regal headgear and an intricate, high-collared chest piece while ripping out a still-beating heart.)

With Wednesday marking 20 years since her death, some of Aaliyah’s discography, long absent from streaming services, has finally arrived on platforms Spotify and Apple Music amid an ongoing fight to control her legacy. And with a 1990s and Y2K fashion revival currently underway, now is also an opportune time to revisit her style legacy.

“She owned that street chic vibe,” said her stylist Derek Lee, who began working with Aaliyah before the release of her 1996 sophomore album, “One in a Million.” Her style was, he added, “hard and soft at the same time. It’s masculine, but feminine.”

“I see her influence in most (celebrities today),” Lee continued. “Any girl that you see that wears baggy pants and a little crop top, and it’s still sexy, that’s Aaliyah all day long.”

“I see it in certain billionaire girls,” he added, without naming names.

Iconic Aaliyah looks have also been directly replicated over the years. FKA Twigs’ paid homage to the R&B singer’s turn as the bloodlusting vampiric Queen Akasha in her video “Two Weeks,” and, in 2013, Zendaya sported a familiar red, white and blue Tommy Hilfiger outfit at a charity event. Keke Palmer, Kim Kardashian and countless fans have worn the glittering bikini top, belt and choker Aaliyah made famous in the music video “Try Again,” from the “Romeo Must Die” soundtrack.

To Lee, no one could hold a candle to Aaliyah when she released that video, which won two MTV Video Music Awards that year. The Swarovski crystal-embellished get-up she wore in it, from Dolce & Gabbana’s Spring-Summer 2000 collection, instantly became one of her best-known looks.

“She just messed it up for anybody else who wanted to wear anything from that Dolce & Gabbana line at that particular time,” Lee said.

On August 25, 2001, Aaliyah and eight others were killed, shortly after wrapping her music video for “Rock the Boat,” when her chartered plane crashed in the Bahamas. Lee was present for the shoot in Abaco but delayed his trip and did not take the flight back.

“In the beginning it was really hard to deal with,” Lee told CNN in 2016. “It changes every year.”

The Los Angeles-based stylist first outfitted her for the video for “One in a Million,” produced by Missy Elliot and Timbaland. In that video, Aaliyah wore a lace-up leather crop top with a vest and matching lace-up pants and gloves; in other scenes, she donned a silver eye patch underneath her side-swept bangs.

“At that particular time, people didn’t really understand how she always wanted to have this tomboy chic look,” Lee said. “So they would try and change her style.”

While Lee always wanted to emphasize her “vibe” and “swagger,” Aaliyah never wanted to look styled, he said.

“She never wanted to look too far away from achievable for any girl on the street.”

But that was part of her personality, he said. Her public and private persona were one and the same.