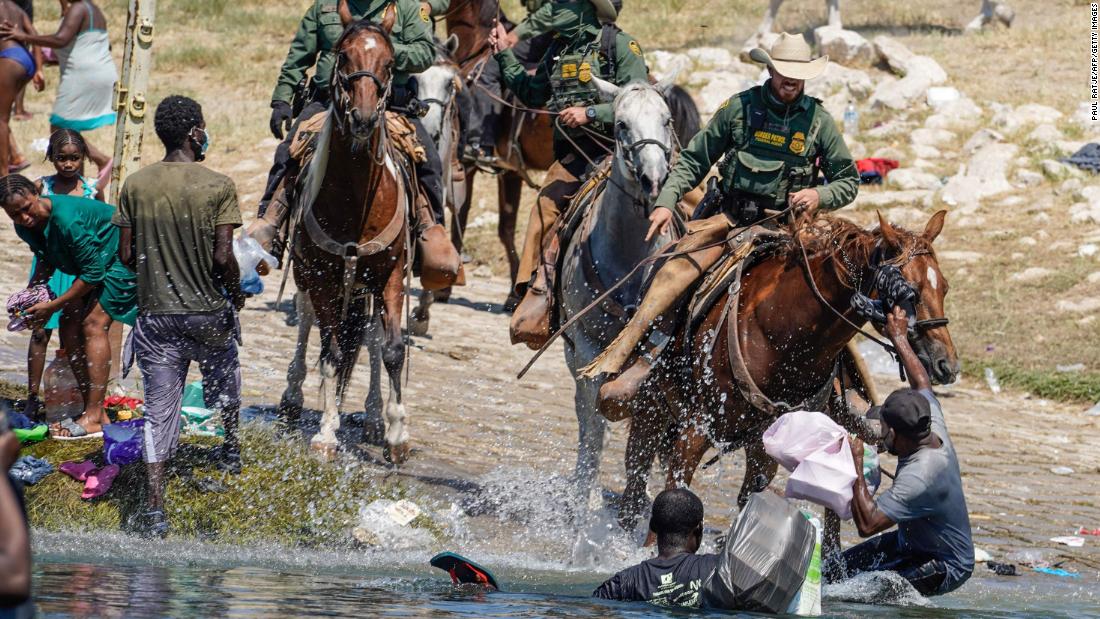 The 26-year-old Haitian national and his family arrived about a week ago after crossing the Rio Grande River. Getting food has been difficult, Tilus said, and he worries about all the children, including his own, who are exposed to the extreme heat and a storm that rolled through this weekend.

About 12,000 migrants — including families, pregnant women and babies — crowded Sunday into squalid makeshift camps under and around the bridge between Texas and Ciudad Acuña in northeastern Mexico, authorities said.

The number of migrants — many of them Haitian — assembled in the temporary site swelled from roughly 400 a week ago. At times, the number has topped 14,000. The surge may owe simply to word of mouth and social media that the border at Del Rio was open, US Border Patrol Chief Raul Ortiz has said.

The migrants sleep in tents or in the dirt, surrounded by growing piles of garbage, and they wait in hopes of being processed by the overwhelmed US Border Patrol. Few wear masks, despite the Covid-19 pandemic, video from the scene shows.

The heat is oppressive. Temperatures on Monday are predicted to top 100 degrees.

Ten babies have been delivered since Thursday by women transported from under the bridge, a hospital official said. Local authorities are overwhelmed by the crush of people, they said.

The Department of Homeland Security moved around 3,000 people on Monday from Del Rio to other processing locations in the US, in addition to the 3,500 moved over the past few days, Secretary Alejandro Mayorkas said during a news conference from Del Rio.

The moves were made “in order to ensure that migrants are swiftly taken into custody, processed and removed from the United States consistent with our laws and policies,” he said.

DHS is also trying to ramp up deportation flights to Haiti and other destinations, Mayorkas said.

“We anticipate at least one to three flights per day,” he said.

Only Haitians in the US before July 29 are eligible for temporary protected status, he said.

“If you come to the United States illegally, you will be returned,” he added. “Your journey will not succeed, and you will be endangering your life and your family’s lives.”

US Customs and Border Protection planned to surge 600 agents and officers to the Del Rio sector, Ortiz said Sunday in a news conference. And the American Red Cross and World Central Kitchen are helping provide supplies and meals, Mayorkas added.

Because of crush of migrants seeking to enter the United States, the international bridge at Del Rio has temporarily closed, and traffic is being rerouted to ensure the uninterrupted flow of trade and travel, Ortiz said.

The Defense Department also will help move migrants from Del Rio to other domestic Customs and Border Protection processing facilities, a Pentagon spokesman told CNN on Monday in a statement. Homeland Security and Customs and Border Protection had requested assistance from the Defense Department as thousands of undocumented migrants have created the makeshift camp.

Texas Gov. Greg Abbott on Monday requested an emergency declaration because of the number of migrants at the bridge.

The “overwhelming surge of individuals unlawfully attempting to cross the Texas-Mexico border in Val Verde County … poses life-threatening risks to residents of Val Verde County and is quickly overrunning law enforcement and health care and humanitarian resources which were never intended to be used in this capacity,” Abbott, a Republican, wrote in a letter to Democratic President Joe Biden.

Added Abbott’s team in a news release: “The federal government’s failure to enforce immigration laws … is leading to substantial burdens on local and state resources, as well as federal resources.”

Del Rio hospital ‘on the brink of being overwhelmed’

Calls to the Val Verde Regional Medical Center in Del Rio have increased “exponentially” since thousands of migrants have been waiting to be processed by immigration authorities, hospital CEO Linda Walker said.

“We are on the brink of being overwhelmed,” Walker said. “We’re stretched. We are in a crisis.”

Beyond the 10 babies delivered, calls for EMS help have not stopped since Thursday, Walker said. Most are from pregnant women needing help and people suffering from dehydration.

A dozen calls came into the hospital on Sunday, Walker said. At least one migrant patient, a 29-year-old from Haiti, is in the hospital with Covid-19, she said.

Of the rural hospital’s 48 beds, 41 were taken up on Friday, she said.

A long trip from Haiti to Texas

Many Haitians camping under the bridge are believed to have been living in South America since the catastrophic 2010 earthquake in their native country. The economic toll of the pandemic on the region further fueled migration to the US southern border.

Haiti is a “dangerous country” now because of the recent presidential assassination and earthquake, Nicole Phillips, the legal director for Haitian Bridge Alliance, an advocacy group for Haitian migrants, told CNN on Monday.

“People still have yet to get drinking water and medical care,” she said. “So what needs to happen is to stop the deportation flights to Haiti effective immediately and instead welcome Haitians to screen them for asylum … so they don’t have to return to where they fled.”

Tilus’ family left Haiti in 2015 after he was assaulted in his own home and his aunt was shot at, he said. His family soon moved to Chile, then left for the United States two months ago.

Tilus, his wife, their 5-year-old daughter and 3-year-old son went to Del Rio because friends and family told him that the border there was open, he said.

Tilus has family in America: his brother, his uncle, cousins, he said. He yearns for a better life. He wants to get an education and better provide for his family.

“I’m 26 years old, and I don’t have a profession,” Tilus said, his voice breaking. “I was doing very badly, I wanted a better life.”

Waiting for his number to be called

Another of the waiting migrants was optimistic. Jose’s eyes were bloodshot, and he hadn’t showered in four days, but he was smiling as he charged his dead cell phone at a migrant center in Del Rio.

His next stop was “Paradise,” meaning Miami, he said.

Jose is not his real name. He asked CNN to protect his identity for fear it might impact his immigration case.

Jose left Cuba at the end of 2019 and got stuck in Costa Rica after the pandemic broke and the world went on lockdown, he said. After working for two years, he and his wife saved $6,000 to migrate to the United States.

Their journey started August 13 on buses and taxis through Mexico. Along the way, the “word on the street” was that Del Rio was the place to cross into the United States, he said. They crossed the river, like so many others, and arrived Tuesday.

US immigration authorities divide migrants into groups, including men, women, pregnant women and families, he said. Pregnant women get priority in processing and so do women. Jose and his wife had to split up.

Jose was given a ticket with a number on it that was greater than 4,000. Everyone under the bridge is anxiously waiting for their number to be called out over a loudspeaker, he said.

Jose’s wife left the bridge Wednesday and was processed by immigration agents Thursday, he said. His wife made it to Miami that same day. And though tired and exhausted, he said he hopes soon to hop on a plane and join her.